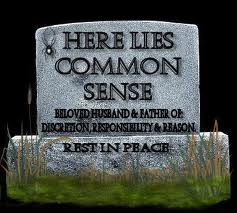 I attended the "special" meeting of the Personnel and Finance Comittee last Tuesday to discuss the options of the City Administrator. Though I was sick with the flu, I still made it a point to attend this meeting.

I told my wife after the meeting that I didnt think I should go to another one of these meetings, as it is "like bouncing your head off the wall." There is no common sense involved. Everyone is worried about offending someone else...

Make a long story short, when I heard that Chief Mike Kass wanted to be part of the "triage" to fill in until hiring a new administrator...I thought the city council was out of their mind. Why in the world would you want to give this guy any more responsibility, power or control when he isnt even capable of controlling his police department or police officers? His department has two recent lawsuits under his "reign", and if he cared about the doings of this city, what is he doing living minutes from Tomah?

Council member Carlos Holcombe spoke up and asked me, "what power? what kind of power is Chief Kass going to have?" Ummm, lets see...in a previous article Kevin Riley talked about hiring a new city administrator through a professional agency as the city would be essentially hiring the CEO of a company...isnt the CEO pretty much the most powerful guy? Hello Carlos...wouldnt the police union contracts be coming up? Wouldnt that be a conflict of interest? So Chief Kass needs to stay away from city hall and worry about his officers and department.

Then one of the city council members made some comment about "picking Ken Witt's Brain in the time he has left here". So I stood up and said, "picking his brain? are you kidding me? you shouldnt be picking his brain now...he has worked with you for ten years and you need to pick his brain now? You should have known all along what he was doing". So has our city council been working with blinders on?

I could go on and on about this meeting, but it aggravates me.

One last thing, when I do run for mayor in April...I need some people to run for city council. Last election there were two open seats on the council and no one ran. Is it that no one cares? It makes me wonder why i should run for mayor. New blood is desperately needed in city hall.
THE ONLY REQUIREMENT NEEDED IS COMMON SENSE.
Posted by Balls&Backbone at 7/02/2012 11:24:00 AM