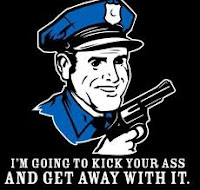 So if Pipkin was suspended for two days without pay for taking extended lunch breaks...why in the world would nothing be done for the two recent lawsuits? if this true about taking his kids to school or being out of his car for extended periods of time then this guy should not be working for the police department. It seems as though the city is reluctant to punish him as it may result in a
favorable response to Mr. Angelini. And if Mr. Angelini does run for Mayor, this would definately be in his favor. THIS is why I feel that Sgt Pipkin is not being punished and still has a job. They are worried more about Angelini being
Mayor than a Sgt being a bad cop.